INTRODUCTION
The external and internal morphology (Anatomy) of honey bees essentially corresponds to that of other insects. The same can be said about physiology (vital functions). However there are differences that must be pointed for a better understanding of their ethology (behaviour).

External anatomy of the Honey Bee 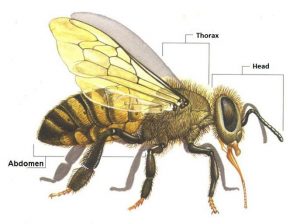 Honey bees belong to the animal kingdom, and within it, to the group of arthropods (articulated legs), to the order of hymenopterans (membranous wings) and to the aphid family.

Honey bees body is divided into three parts that are joined and that move each other: head, thorax and abdomen. Their external skeleton (exoskeleton) is composed of chitin, which gives them the stability that they need. It also protects the three large parts into which their body is divided, having a hard structure around head and thorax, and being extensible on the abdomen area.

This exoskeleton has the distinctive feature of being external (compared with that of the vertebrates) and therefore definitely limits their growth. It also houses the soft organs, unlike that of the higher animals, which —conversely— is covered by them.

It is constituted by the cuticle, made of two layers: a very hard outer one (exocuticle) and an inner one (endocuticle). Internally, honey bees exoskeleton is covered by a basement membrane, where muscles are inserted. 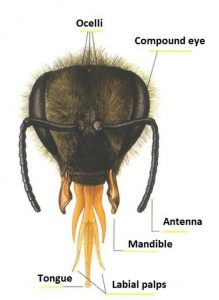 Their head is a chitin box which has the shape of an inverted triangle. It houses their sight organs (simple eyes and compound eyes), two antennae and their mouthparts. It is attached to the thorax by a narrow and membranous neck.

Three simple eyes, also known as ocelli, are located on the top of their head, between two compound eyes. They are covered with tactile hairs and have a very simple structure.

Bees use ocelli to see at close range, and in almost dark conditions inside the hive. It has been verified that they are sensitive to the intensity of light and are used as photometers. The beginning and the end of bees’ working day are both determined by the ocelli.
The two compound eyes are formed by numerous hexagonal facets and each of them by thousands of simple eyes (queen has 3,000, workers 6,000 and drones 13,000). The shape of these facets is related to the kind of construction of combs.

Their vision of colours varies with respect to human vision. They have more visual acuity on the ultraviolet side of the spectrum. On the red side they are practically blind. They see blue, yellow, green-blue and ultraviolet very well.

They see red colour as if it were black and they confuse orange and yellowish green as if they were yellow.

Although their visual acuity is lower than that of man, bee’s eyes perceive 10 times more images in an equal time.

They perceive polarised light, that is, the kind of light in which rays vibrate in a single plane. 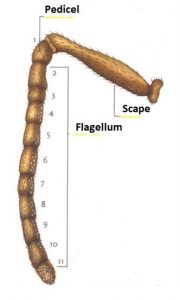 Two antennas emerge from the centre of the face, very close to each other. They articulate with the head by means of a membrane. Antennas are formed by a rigid part (scape) and a flexible part (flagellum) that is divided into segments. The portion that comes after the scape is called pedicel, which is a segment that is also part of the flagellum.

The number of segments is 12 in queens and workers and 13 in drones
.
Antennas have numerous sensory organs like hair and pores. They are 3,000 in queens, from 3,000 to 3,600 in workers and 30,000 in drones. These organs are responsible for touch, hearing and smell.
Bees’ hair or hair organs are organs of touch and cover most of the antenna. Pores are funnel-shaped and are used for smell.

If we make a cross section of the antenna and observe it under the microscope, we will clearly see inside it a network of nerves that serve as receivers and transmitters of sensations. 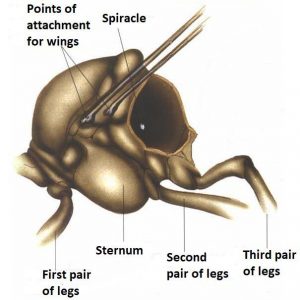 Bees’ thorax houses their locomotor apparatus. It is constituted by three segments or rings, which receive the following names from the front to the back: Prothorax, Mesothorax and Metathorax, along with a small additional segment called Propodeum.

Each segment has a pair of legs and second and third ones have a pair of membranous wings. They also have spiracles (orifices) which allow the air intake for the oxygenation of the thorax.

Their thorax is also called “corselet” and on its upper dorsal is where queens are marked with the colour of their year of birth, according to the international colour code.

As we have seen before, bees have three pairs of legs which are divided into nine pieces called segments: two short ones, the first of which is attached to the body, and three long ones: femur, tibia and tarsus —this latter segment in turn consists of four segments—. These segments allow bees for more mobility.

The first pair of legs is located in the prothorax. These legs have a series of devices or pieces that are used fundamentally for eyes cleaning. It is a kind of brush divided into two pieces (vellum and comb or brush), the latter is articulated and is closed at will for the cleaning of the antennas. 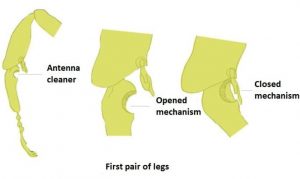 Last segment of the tarsus has two hooks, which are used to hold onto surfaces on which honey bees want to walk —which can be smooth or rough—. They are also used to hold on to other bees when they form the so-called wax chain, or when they swarm and form the classic ball of bees.

The second pair of legs is located in the mesothorax and do not have any special characteristics.

This second part of the thorax is where the first pair of spiracles opens. This has great importance in the diagnosis of the disease called Acarapisosis.

These legs have at the end of the tarsus a grapple or spur that they use to detach the pollen balls which they carry in the “baskets” of the third pair of legs. They also have a kind of brush to clean their wings. 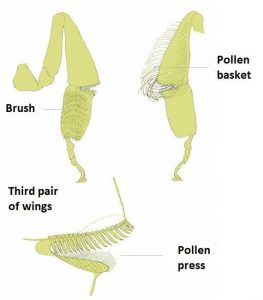 The third pair of legs is located in the metathorax and it is the largest.

These legs have devices to store pollen and propolis. They are called corbiculae or “pollen baskets” and they are located on the outside of the tibia. These baskets have strong and a little bit curved hairs, which allow them to retain pollen or propolis collected from flowers or from buds that bees visit, after being kneaded with the jaws.

Only workers have “pollen baskets”, on the contrary queens and drones lack them for not needing them.

In this third pair they have another device, which they use as a clamp to collect wax wafers made in the wax-producing glands and then pass them to the jaws for their kneading and subsequent construction of combs. 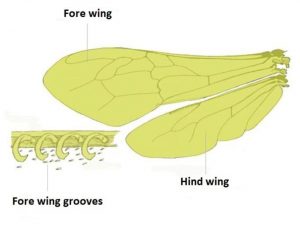 Wings are in the thorax. The first two —largest— are inserted in the metathorax and the other two —smaller— in the mesothorax.

These two pairs of wings are formed by a very thin and transparent membrane and reinforced by a network of chitinous veins. These veins also allow the circulation of hemolymph (blood of the bee) and oxygen.

They have convex and concave ribs. In a certain point they have a measurement between two points (cubital index) that serves to classify the different breeds of bees.

When bees make long flights they join their two wings by means of grooves of hooks to build a single large wing that makes the flight much faster.

On the contrary, when it makes precision flights to visit flowers and collect nectar or pollen, they unhook them and can remain still in the air like dragonflies. 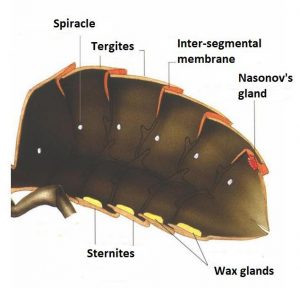 The honey bee abdomen is composed of 9 segments, but only 6 are visible in females and 7 in males. Abdominal segments have two plates each. The back plates are called “tergites” and the ventral ones “sternites”. They are joined by flexible membranes which allow them a variety of movements, such as lengthening, shortening or curve in any direction.

Inter-segmental membranes of the sternites are weak and drilled by Varroa destructor to feed on the hemolymph of the bee.

In each tergite they have small holes called spiracles or stigmas, where air enters the interior of the insect.

Their abdomen is covered with hairs. According to their length, together with the colouration of the segments, they are indexes that are also used for the identification of different breeds of bees. In the abdomen we find: the wax glands, the Nasonov’s gland and the defence system.